I felt like I lost my identity in March 2020. Stage evaporated, contracts reduced, and I was quite literally grounded. May is #mentalhealthawareness month, as as someone who speaks fairly publicly about their own struggles, I want to remind you that many don’t. That “how are you doing?” sometimes needs to be asked twice with a *really* added. That space needs to be held. That a veneer is easy to fake. Many aren’t OK. And we have to normalize discourse around our mental state.

I used to wake up and ask myself “how much do I hate myself today?” I didn’t enjoy this exercise, nor did I want to keep asking this question, but some version of this is the track on repeat in the head of someone who is depressed. And I’ll never forget the look on my dear Mother’s face after I told her (years later) this had been my internal monologue. At a really great time in my career no less. Last summer I revisited this cerebral village of personal lament. Depression ebbs and flows. Thankfully, now I feel like I’m back at my baseline (after putting in a lot of work and nearly two months of WFHawaii) and am ready to take life by the horns post-pandemic (would you expect anything less.) Today isn’t my personal cry for help. This is me speaking up for those who can’t or don’t feel strong enough right now.

Depression is rampant among us and on the rise. Anxiety too. The pandemic has only made this worse (from preliminary data) so I wanted to share a few tips that came to mind today after being reminded of the importance of this dialogue in May.

First, it is totally okay (& tbh normal) to not be okay. Full stop.

Second, emotions aren’t competitive. As humans, as entrepreneurs, as pandemic survivors, and as sexual beings, we all feel different feels. Every feel is valid. Many are hard to understand. Thats ok too. We’re complex

Third: don’t hesitate to say something nice to someone if you think it. You literally *never know* how much that nice thing may mean on that day. A few words can *literally* save a life. Ask yourself, who have I thought fondly of today? Then slack, text, call them and share that.

Fourth: Many people have to *appear* excellent for work, branding, investor, or other social reasons. The highlight reel is just that. I remembered a vivid moment from a decade ago earlier today. I was new to the Silicon Valley, and was ugly crying after a huge win/career milestone. This didn’t make sense, of course. I recall my then boss (now mentor) asking what I needed in that moment as he embraced me in an empathetic hug. “I just need to be told I did a good job” I gasped. Even though it was clear publicly, those words of affirmation were necessary for my sanity in that vulnerable moment. I felt pathetic. But in retrospect I’m glad I told him.

Send the text. Make the call. Be honest about where you’re at with yourself first. Share with your nest. Normalize emotional honesty.

Fifth, especially for my single friends: you’re thought about more than you realize. I discussed this w/ a friend recently & I think it’s easy to feel we’ve been *forgotten* because of the lack of human contact. We haven’t. And in some cases, the heart has only grown fonder.

And lastly, I promise if you woke up hating yourself today, you’re not alone. The finest among us also struggle. Keep fighting. We need you. I need you. And I’m here. Please, don’t give up <3.

How Las Vegas Taught Me Self-Love

It hit me in the shower. I felt like I was going to vomit... but I didn't think it could be the wine from first class. What was this hot surge of energy barging into my chest? 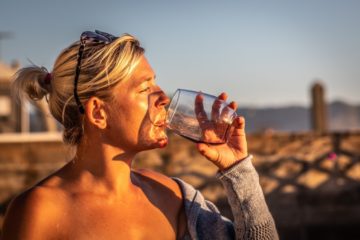 Pat Your Pandemic Self on the Back

Ahhhhh finally, our frontline friends share selfies from vaccine lines, our good news arriving in needle form. Collective hope restored by pandemic numbers on the decline and leadership on the rise. And though our loins Read more…

The Power of Empowering Young Minds: Behind the Biography Envision Experience Podcast

“It’s through her storytelling that she paints a vivid picture of how embracing your true self, the weird unicorn in all of us, can have the greatest impact on your future success.“ – Kind words Read more…